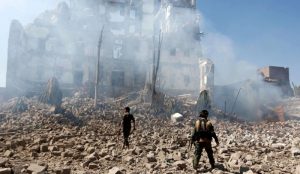 Yemen’s military reports that the Saudi-led military coalition killed two Hezbollah “military experts” in an airstrike, like reported by haaretz.com.

The two were on their way to train Houthi rebels in Yemen, the report said, and were killed in the Yemeni district of Marib, west of Sanaa.

Arab intervention in Yemen began in 2015, immediately after Saudi King Salman was crowned. It was expected to be a short, swift war.

Saudi Arabia is armed with advanced American weaponry, its pilots are trained in the United States and the U.S. itself is also providing Riyah with  intelligence.

The Saudi-led coalition says one of the main justifications for its intervention is to protect shipping routes such as the Red Sea, which is used to bring Middle Eastern oil and Asian goods to Europe through the Suez Canal. It has said that it foiled previous attacks in the Red Sea in April and May.

The Houthis control much of North Yemen, including the capital Sanaa and drove a Saudi-backed government into exile in 2014.

In July, 30 civilians, including women and children, were killed in heavy fighting between pro-government forces and Houthi rebels, which are Shi’ite.

Yemen is strategically located on the Red Sea and the Bab al-Mandeb strait, and has become a theater of international competition, with America, Saudi Arabia and the United Arab Emirates on one side and Iran on the other.

More than 10,000 people have been killed, half of them civilians, in Yemen’s civil war. Some 50,000 children dead of hunger or cholera; millions of displaced people, and hundreds of thousands suffering from malnutrition.