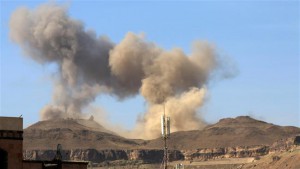 Warplanes from a Saudi-led coalition carried out the most sustained bombardment of Yemen’s capital Sanaa in nearly two months of air strikes on Tuesday night, residents of the city said, hitting army bases and weapons depots.

It was the first time air strikes continued from morning until after midnight since the campaign began on March 26, residents said, and led to terrifying blasts across the city.

Yemen’s exiled government in Riyadh, backed by the coalition, said on Tuesday it would not agree to talks with rebels until they withdrew from cities and surrendered weapons, meaning peace talks to end the civil war seem unlikely soon.

The coalition restarted strikes late on Sunday after a five-day humanitarian pause, waving away pleas for an extension by the United Nations by pointing to what it said were repeated abuses of the ceasefire by rebels.

The rebels, an alliance of the Houthi militia and army forces loyal to former president Ali Abdullah Saleh, control most of the populated west of Yemen, and have been fighting local groups in the cities of Aden, Taiz, Marib and al-Dhala.

The Houthis and Saudi forces exchanged artillery and rocket fire across the border on Wednesday night and coalition warplanes bombed the group’s stronghold of Saada, the rebels said.

Sunni Muslim Saudi Arabia regards the Houthis as a proxy of its regional foe Shi’a Iran, although many analysts say Tehran’s ties to the group fall short of that, and wants to restore the government of President Abd-Rabbu Mansour Hadi.

An Iranian ship en route to Yemen’s Hodaida port, which is controlled by Saleh and the Houthis, is due to dock on Thursday night, carrying activists and a cargo of aid, and has said it will not submit to searches by the coalition.

The United Nations Security Council last month passed resolution 2216 imposing an arms embargo on the Houthis. It also demanded militia abandon areas they have captured and return weapons seized from the army.

Saudi jets this month struck Sanaa airport’s runway to stop an Iranian cargo plane, which Tehran said was carrying a Red Crescent aid shipment, from landing without having been inspected by it or the UN.