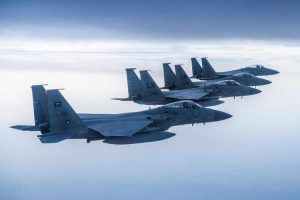 Saudi Arabia’s air force has struck ballistic missile sites in the Houthi-controlled Yemeni capital of Sanaa, like reported by thenationalnews.com.

The kingdom’s air force has been engaged in a major campaign in support of forces loyal to the internationally recognised Yemeni government as fighting intensifies on several fronts in the conflict.

On Sunday, a major offensive by government-aligned forces, including the Al Amalikah brigades, cut off Houthi supply lines between Taez, Yemen’s third-largest city, and the Red Sea port city of Hodeidah.

The offensive represents a large-scale counter attack against Houthi forces who made gains in the oil-rich northern city of Marib after one of the war’s biggest escalations in February.

Sanaa residents were asked to avoid gathering in the open to minimise the risk of civilian casualties, Saudi state TV reported on Tuesday.

Residents told Reuters they heard large explosions across the city and that at least two military targets had been struck. The Houthis acknowledged that sites had been struck in the northern part of Sanaa.

The strikes come as the Houthis escalate attacks using drones and ballistic missiles aimed at population centres and vital energy infrastructure in Saudi Arabia, with a number of attacks being launched at the weekend.

The coalition said its raids had destroyed a high-value ballistic missile target.

The war in Yemen is now entering its sixth year, despite multiple attempts at a negotiated settlement. Vital ports such as Hodeidah remain under Houthi control, a situation which has pushed the country deeper into crisis.

The UN estimates about 2.3 million children are suffering from malnutrition, while as many as half of the population lack access to clean drinking water.