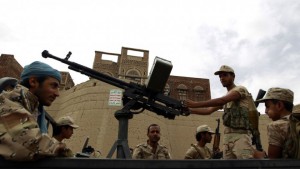 Pro-government fighters in Yemen have received weapons shipments in the war-torn city of Aden, as Shiite rebels scramble to deploy reinforcements, military officials from both sides of the conflict said Sunday.

Military and port officials in Aden said new heavy and medium weapons and ammunition arrived in Aden in late July by sea to support pro-government army divisions and militias against the Shiite Houthi rebels and allied military units.

The officials said tanks, artillery, missiles and armored vehicles were included in the shipment from Saudi Arabia and the United Arab Emirates, which have been waging a U.S.-backed air campaign against the Iran-supported rebels since March.

After months of fierce fighting, pro-government fighters have recently pushed rebels out of Aden and advanced in Taiz, Yemen’s third-largest city.

They said the Houthis are determined to continue fighting in Aden and Taiz, and have demanded that allied tribes send fighters to the two fronts. The Houthis are also actively recruiting new fighters in mosques, the officials said.

All officials spoke on condition of anonymity because they were not authorized to speak to journalists.

Saudi Arabia said one of its citizens was killed Sunday when a house inside the kingdom was struck by fire from neighboring Yemen.

A civil defense spokesman, Ali bin Omair al-Shahrani, said in comments to the official Saudi Press Agency that the Saudi was killed in the border town of Najran.