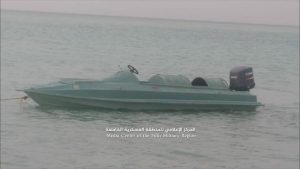 The UAE-backed Yemeni Navy claims to have intercepted and seized a booby-trapped, explosives-laden boat launched by Houthi rebels, like reported by maritime-executive.com.

According to UAE media outlet Khaleej Times, the Yemeni Navy intercepted the boat as it was on its way to intercept a merchant ship in the Red Sea. A Yemeni military source claimed that the boat was making about 30 knots.

The claim mirrors a report from the UAE/Saudi coalition in late August. According to coalition spokesman Col. Turki al-Maliki, the force foiled a plan to attack commercial shipping on August 23, when “a booby-trapped boat was launched from the shores of [rebel-held] Hodeida.”

Houthi rebel forces have attacked vessels in the Red Sea before, including both merchant ships and UAE/Saudi-coalition warships. In July, after a series of strikes on Saudi-owned VLCCs, state oil firm Bahri temporarily suspended transits through the Strait of Bab al-Mandeb, citing security concerns.

The rebels’ methods have included conventional anti-ship missiles, improvised naval mines and remote-controlled bomb boats. In January 2017, Houthi forces successfully struck and damaged the Saudi frigate Al-Madinah with an unmanned drone boat. According to competing reports, they may have attempted a boat strike on a Saudi petroleum product terminal in April 2017; struck a pier at Mokha in July 2017; and (according to Houthi sources, and not verified) may have struck a UAE warship off Mokha in July 2017. Al Arabiya reported a third, unsuccessful bomb boat attempt on a military vessel in August 2017.

U.S. Director of National Intelligence Dan Coats testified last year that the U.S. believes that Iran is supplying the technology for Houthi remote-controlled boats. Tehran does not admit to providing military support for the Houthi cause, but it is widely believed to be funneling arms and funding to the rebel forces.