You are here: Home / MidEastGulf / Yemen: more than 800 child soldiers recruited by Houtis 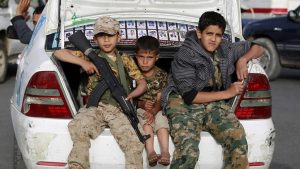 More than 800 children as young as 11 years of age were recruited to Yemen’s devastating conflict in 2017 alone, the United Nations said.

The latest report of the UN secretary general on children and armed conflict verified 842 boys had been recruited by various parties in Yemen, where years of war have left thousands dead and pushed the country to the brink of famine.

Seventy-six children have been documented as used in active combat.

The rest were recruited to “guard checkpoints and government buildings, for patrolling, fetching water and bringing food and equipment to military positions”, according to a statement released by the UN humanitarian affairs agency (OCHA).

The UN also verified the killing and maiming of 1,316 children last year alone, 51 per cent of them in air strikes.

The Yemeni government, backed by the United Arab Emirates, Saudi Arabia and their regional allies, is battling northern rebels, known as the Houthis, for control of the impoverished country.

The Saudi-led alliance is the only party directly involved in the conflict that is known to conduct air strikes in Yemen.

In 2014, the Houthis drove the government of President Abed Rabbo Mansour Hadi out of the capital into southern Yemen, prompting the intervention of Saudi Arabia and its allies the following year.

Both the government alliance and rebels stand accused of neglecting to protect civilians.

Yemen’s military “Security Belt” force — UAE-backed troops fighting in the southern part of the country — was blacklisted by the UN last month.