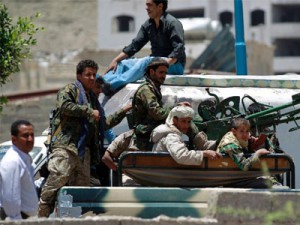 Forces loyal to Yemen’s exiled government recaptured a southern provincial capital from rebels and their allies on Sunday as they pressed an advance from second city Aden.

Zinjibar, capital of Abyan province, had been held by troops of the renegade 15’th Brigade which remains loyal to ousted strongman Ali Abdullah Saleh who is allied with the rebels.

Troops entered the coastal town, some 50 kilometres east of Aden, after overrunning the brigade’s barracks outside with support from Saudi-led air strikes, the sources said.

Booby traps planted by the rebels to cover their withdrawal took a heavy toll among both loyalist fighters and civilians.

At least 19 people were killed and 163 wounded on Saturday and Sunday in Zinjibar and the surrounding area, Aden health chief Al-Khader Laswar told AFP.

Mines and unexploded ordnance have caused similarly high death tolls in Aden itself since the rebels’ pullout last month, with dozens of civilians reported killed and hundreds wounded.

Aden was the last refuge of President Abedrabbo Mansour Hadi before he fled into exile in neighbouring Saudi Arabia in March.

Riyadh has since led a bombing campaign and air and sea blockade against the Iran-backed rebels and their allies in a bid to restore his authority.

It has also provided training and equipment to loyalist forces and earlier this month reportedly deployed hundreds of ground troops to Aden.

Zinjibar has changed hands several times in recent years of turmoil in Yemen. During the 2011 uprising that forced Saleh from power, it was overrun by Islamist militants, including al-Qaeda loyalists.