You are here: Home / MidEastGulf / Yemen: liberation of Sana imminent 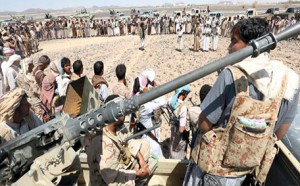 Yemen’s Chief of Army Staff, General Mohammed Al Makodshi praised the precious and unprecedented sacrifices offered by the UAE armed forces to support the aspirations of the Yemeni people.

Al Makodshi confirmed to Al Khaleej that the joint forces have pursued the remnants of the rebels out of Marib and that the liberalisation of Sana’a is imminent.

Sultan Al Aradhah, Marib Governor said that the Yemeni national army with the assistance of the coalition forces are continuing to remove emaining pockets of Houthi militia in Sarwah and Majzar.

AbduRab Al Shadady, Commander, confirmed for deployment of security in Marib and the provision of all basic services.

In the province of Saada, stronghold of the Houthis (242km north-west of Sanaa), local sources said that coalition aircraft bombed the communications network and targeted several Houthi positions.

In Mokha, Taiz city, local sources reported that the Arab coalition also launched a series of air raids leaving considerable damage in the ranks of the rebels.

Hundreds of people demonstrated on Monday in Mukalla to demand the withdrawal of Al Qaeda fighters who overran Yemen’s southeastern coastal city months ago, witnesses said.

“Leave our city!” chanted demonstrators marching through the centre of Hadramawt’s provincial capital ahead of a rally in Al Hureiya Square, witnesses said.