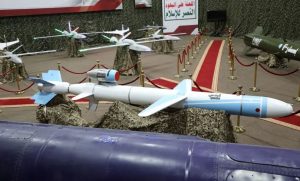 The kingdom said the drone attack on Ras Tanura Port on Sunday and attempted missile strike on an Aramco residential area “had targeted global energy supplies. Ras Tanura is one of the world’s largest oil shipping ports and the Aramco complex in Dhahran houses workers and their families from all over the world,” Arab News reports.

GCC Secretary-General Nayef Al-Hajraf said, “These terrorist attacks do not only target the security and economic capabilities of the kingdom, but also the nerve center of the global economy and oil supplies, as well as global energy security.”

Saudi Arabia’s media has highlighted the fact that US politicians are concerned that a lack of response from the White House may be emboldening the Iranian-backed Houthis. The new US administration took the Houthis off a terror list that the Trump administration had added them to in January. Since then, they have rapidly expanded their attacks and launched an offensive on Marib in Yemen. Saudi Arabia intervened in Yemen in 2015.

The attacks on Saudi Arabia are a regional threat by Iran. This is clear in their complexity. The Houthis did not have drone and ballistic missile technology before Iran sought to support them. Like Hamas and Hezbollah, they have grown with Iranian support and technical know-how. Evidence shows that some attacks on Saudi Arabia that were alleged to be by the Houthis actually came from Iraq. That includes attacks in January 2021 and in May 2019. The Iranians directly attacked Saudi Arabia’s Abqaiq facility in September 2019. This shows that Iran has launched a regional war against Saudi Arabia. It comes at a bad time for Riyadh because the US is harshly critical of Riyadh for involvement in the killing of Saudi dissident Jamal Khashoggi in 2018.

The Houthis have also threatened Israel in the past. This included the basing of potential long-range drones and also because the official Houthi slogan includes curses of Jews and seeking the destruction of Israel.

Arab News notes that “the continued escalations of the Houthi militia in Marib province coincided with the escalation of its extremist attacks on civilians in Saudi Arabia,” Yemeni Information Minister Muammar Al-Eryani said on Sunday. The minister added that the Iranian-backed militia is used as a tool to destabilize the security and stability of Yemen and the countries of the region, state news agency SPA reported.

The UAE has condemned the attack on the Ras Tanura port as well. Al-Ain noted that the UAE Ministry of Foreign Affairs and International Cooperation confirmed, in a statement, that this cowardly attack targets energy supplies and security, which reflects the Houthi group’s challenge to the international community and its disregard for all international laws and norms.

“It urged the international community to take an immediate and decisive stance to stop these repeated actions that target vital and civilian installations and the security and stability of the Kingdom of Saudi Arabia.”

Meanwhile, the Houthis have said that an “indirect” meeting with the US in Oman was not fruitful, according to Fars News. According to pro-Houthi media, the Houthi forces are advancing “like lightning” on various fronts in Marib, and Riyadh-affiliated forces are retreating and losing ground despite air support and the recruitment. A member of the group’s political bureau also spoke about Houthis military prowess: “We are now able to build a variety of weapons and military equipment, from weapons to drones.”

Tasnim News in Iran showed how closely Iran follows, and likely coordinates, these attacks. Several stories included claims from the Houthis of their attack as well as pointing out how Saudi Arabia had been dealt a blow. The Houthis call the attack Deterrence Operation 6.

The overall message of the attacks is that the Houthis can escalate this conflict as Iran did in September 2019. Iran senses that Saudi Arabia is isolated. It knows the US is trying to forge a peace agreement in Afghanistan, potentially working with Iran, India, Pakistan and Turkey to do so. It also knows that it is pressuring the US in Iraq and potentially doing so in Syria. In the Gulf it continues to seek to mine ships, as it did with the attack on an Israeli ship earlier this month.

It also knows the US didn’t respond to a 122mm rocket attack on Al-Asad base earlier this month. Why stop now, Iran wonders. Riyadh is hesitant to escalate anywhere else and wants the war confined to Yemen. The expanded attacks on Saudi Arabia show that even though Riyadh has improved its air defenses, the Houthis can continue to seemingly target areas of the country at will.