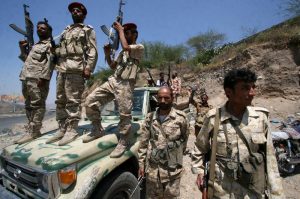 Yemeni police raided an ISIL hideout in Aden capturing a high-ranking member believed to be the mastermind behind a series of deadly attacks, like reported by thenational.ae.

During questioning, the ISIL leader, code-named ‘FAS’, admitted his involvement in an attack on a military base last month that killed 14 people and injured 40 others.

“The leader revealed important intelligence related to suicide attack operations, which the organisation is planning to carry out in the near future including a number of explosive car attacks and suicide operations,” LtAbdulrahman Al Naqeeb, the spokesperson of Aden police told the National, said.

The attacks, he said, were aimed at other Southern Transitional Council administrative buildings and military structures used by the Arab Coalition in their fight against rebels.

During the raid, counter terrorism units also seized a large cache of explosives from the Enma City hideout and some “very serious documents” believed to be a major intelligence breakthrough for the Yemeni forces.

He said the documents and information gained from the interrogation will allow security forces to foil several terrorist plots. He said ISIL were planning to conduct a series of deadly attacks, which included assassination attempts on top Yemeni officials.

The Saudi-led coalition — which includes the UAE — intervened in the Yemen war in 2015 at the request of Yemeni President Abdrabu Mansur Hadi.