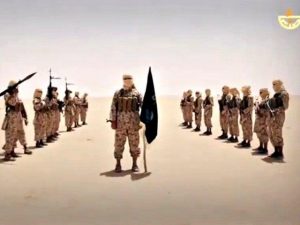 U.S. President Donald Trump’s administration has described the IRGC as a terrorist group when imposing sanctions on the organization, though the State Department has not designated it a Foreign Terrorist Organization (FTO).

Although the U.S.-led coalition and local forces have reduced ISIS to a remnant of its former self in Iraq and Syria, both the organization and its rival al-Qaeda are taking advantage of safe havens in Yemen to plot against Americans, Robert Karem, the assistant secretary for international security affairs at the Pentagon, revealed.

In written testimony prepared for a Senate Committee on Foreign Relations hearing on the Yemen war, the Pentagon official declared:

AQAP [al-Qaeda in the Arabian Peninsula] continues to pose a significant threat to the American people by plotting attacks against the homeland, while [ISIS-Yemen] aims to use the ungoverned spaces of Yemen to plot, direct, instigate, supply, and recruit for attacks in the region.

To combat AQAP and [ISIS-Yemen], a small number of U.S. forces, in coordination with the internationally-recognized Government of Yemen, are supporting our regional counterterrorism partners in ongoing operations to degrade the groups’ abilities to coordinate external terrorist operations and blunt their aspirations to use Yemen as a safe haven for terror plotting.

Citing the 2001 Authorization for Use of Military Force (AUMF), Karem noted that the American military is also conducting airstrikes against al-Qaeda and ISIS.

U.S. officials and independent analysts have warned for years that al-Qaeda is exploiting the security vacuum and humanitarian situation in Yemen to seize territory and recruit fighters.

Echoing Karem, David Satterfield, the acting assistant secretary for near eastern affairs at the U.S. Department of State (DOS) who also testified, highlighted the threat against the United States posed by the jihadist groups and Iran in Yemen, telling lawmakers:

Defeating ISIS-Yemen and AQAP, countering Iran’s nefarious activities in the region, and reducing the suffering of the Yemeni people, all hinge on the resolution of this conflict. AQAP [al-Qaeda in the Arabian Peninsula], ISIS-Yemen, and the IRGC are manipulating the security vacuum created by the conflict to expand their influence in Yemen.

While the international community must do all it can to mitigate humanitarian suffering, the only way to truly end the humanitarian crisis is by ending the conflict. To that end, the United States firmly believes that the only possible solution to the conflict in Yemen is a negotiated political settlement under [United Nations] auspices.

Both the State and Pentagon officials stressed that a U.N.-brokered political settlementinvolving the Saudis, the Iran-allied Houthis, and the Hadi government is the only way to end the Yemen conflict.

The U.N. has repeatedly failed in its attempts to negotiate peace in Yemen.

According to Karem, the Trump administration’s primary goals in Yemen are:

A bipartisan group of Senators—including Mike Lee (R-UT), Bernie Sanders (I-VT), and Chris Murphy (D-CT)—argue that the U.S. military efforts in support of Saudi Arabia in Yemen are unconstitutional.

During Tuesday’s hearing, the Trump administration witnesses defended U.S. military operations in Yemen, saying they are intended to prevent attacks against the United States and protect the “more than 80,000″ U.S. citizens who live in Saudi Arabia.

The U.S. Constitution grants the American president the authority to declare war when there’s an “imminent” threat to the United States and American lives are at risk.

In the case of Yemen, the president does not have that authority, argue Sens. Lee, Sanders, and Murphy.

The anti-Yemen conflict Senators have introduced a resolution to reassert Congress’s sole constitutional authority to declare war, calling for “the removal of United States Armed Forces from hostilities in the Republic of Yemen that have not been authorized by Congress.”

The Pentagon “strongly opposes any reduction or withdrawal of U.S. support to the Saudi-led Coalition,” Karem added.