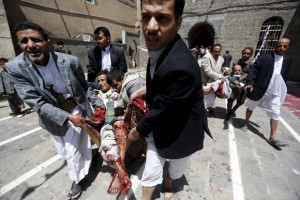 A bomb has exploded at Shi’ite mosque in Yemen’s capital, Sana’a, wounding at least 13 people.

The blast reportedly targeted the al Sayyah Mosque, in Shuub district, where Muslims had gathered for the traditional Friday prayers.

The attack was claimed by Islamic State (Isis) on Twitter, Reuters reported.

It was not immediately clear if anyone was killed in the explosion, with the country is engulfed in a civil conflict between the Iranian-backed Houthi militia, who are Shi’ite, and a Saudi-led coalition supporting forces loyal to exiled President Abd-Rabbu Mansour Hadi.

Earlier on 22 May, coalition warplanes targeted Houthi positions in the capital.