You are here: Home / MidEastGulf / Yemen is the ‘forgotten crisis’ 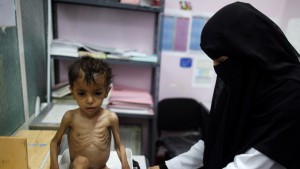 Yemen has become the ‘forgotten crisis’ with more than 10 million people in need of aid because of the conflict in the country, according to the International Development Secretary Priti Patel.

She made the statement as the Disasters Emergency Committee (DEC) launched an appealto help millions of people who are on the verge of starvation.

The organisation will broadcast its message on major TV channels including the BBC, ITV, Sky, Channel 4 and Channel 5 on Tuesday to raise funds.

Oxfam, the British Red Cross, Save The Children and Christian Aid are among the charities supporting the ‘Yemen Crisis Appeal’.

DEC chief executive, Saleh Saeed, said it was time to act to save millions of people including starving children.

Now is the time to save lives in Yemen before it is too late. Children face the greatest risk of starvation – almost half a million infants and young children need immediate treatment for malnutrition.

Ms Patel said Yemen “faces a humanitarian crisis that the international community cannot ignore” and ministers will match donations from the UK public up to £5 million.

She added: “Yemen has become the ‘forgotten crisis’ despite more than 10 million people desperately needing help and the threat of famine hanging over the country.”