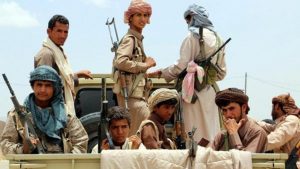 Al-Houthi Militias are recruiting children from tribes and families from districts that are still under Al-Houthi control by using force and intimidation to join battle fronts and face their inevitable death, only to serve Iran’s agendas.

Iranian-backed Al-Houthi Militias are collapsing rapidly, and now in need for recruiting new fighters, especially that they are now on the verge of defeat.

This situation forced the Militias to forcibly recruit and kidnap youths and boys from schools and supermarkets.

A number of Yemeni Scholars warned from responding and joining these militias because militias are unjust criminals and invaders who have shed the blood of innocent people and destroyed mosques.

The scholars also called on the legitimate government and Arab Coalition Forces to liberate districts and governorates that are still under Al-Houthi Militias, so the people of Yemen can live in peace and stability.