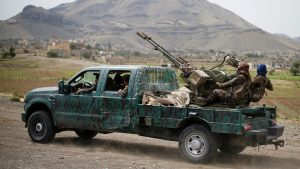 Yemen’s internationally-recognized government accused the Iran-backed Houthi militia of working closely with both al-Qaeda and ISIS to inflict terrorism on the Yemeni people in an intelligence report submitted to the UN Security Council, like reported by alarabiya.net.

“In addition, the report shows how these militias are using their relationship with terrorist organizations to inflict more terrorism on the Yemeni people.”

The Houthis have intensified their attacks on Yemen and neighboring Saudi Arabia in recent weeks. One civilian was killed and six others were wounded on Tuesday after a ballistic missile launched by the Iran-backed militia fell in the middle of a residential neighborhood in Yemen’s Marib, Al Arabiya reported citing local sources.

Marib is the last major northern stronghold for pro-government forces and is home to one of Yemen’s largest oil infrastructures.

Misusing security information
When the Houthis took control of Sanaa, the group seized all information collected by the government’s national and political security services, according to the report.

The Houthis “manipulated and misused [the information] to build close relationships with both al-Qaeda and ISIS.”

A ‘safe haven’ for terrorist organizations
The Iran-backed group also released 252 terrorist prisoners who were jailed in the national and political security prisons of Sanaa and other governorates, the report revealed.

Jamal Mohammed al-Badawi, one of the terrorists behind the bombing on the US Navy destroyer the USS Cole, was freed from jail by the Houthis, the report stated. In October 2000, the USS Cole was bombed in a suicide attack carried out by al-Qaeda in the Yemeni port of Aden, killing 17 sailors, injuring 39 others, and damaging the ship.

Fifty-five al-Qaeda terrorists are currently in Sanaa and other Houthi-controlled areas, the report added.

The report also includes testimonies of al-Qaeda members who were captured by Yemen’s National Army Forces while they were fighting alongside the Houthi militia.

Al-Qaeda member Musa Nassir Ali Hassan al-Melhani admitted to the presence of al-Qaeda fighters within the Houthi militia, and said that the Iran-backed group heavily relies on the fighters in Sanaa.

The Yemeni government said that the Houthis and terrorist organizations plan coordinated criminal acts that threaten the security and stability of Yemen and the region, as well as international shipping lines.

The government called on the Security Council and the international community to “stand against the terrorism practiced by these militias, and to support and agree the efforts exerted by the legitimate government and the National Army to end their battle against all aspects of organized terrorism by these Houthi militia against all Yemenis.”