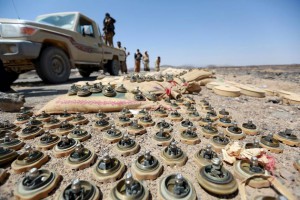 The officials, who remain neutral in the conflict that has splintered the country, said the fighting took place between Bab al-Mandab — the strategic entrance to the Red Sea — and the port city of Mokha. They said the Saudi-led coalition is attempting to clear a path for the pro-government fighters toward Mokha.

Four civilians were shot dead near the front lines, security officials said, adding that it was not clear which side was the source of the gunfire.

Meanwhile Saleh al-Samad, the head of the Houthi political council, said his group would carry out a “strong escalation” in the coming days, in a statement published by Yemen’s Houthi-controlled state news agency.

The Houthis have controlled the area near the strait for several months. They have been in control of the capital Sanaa since last September and are at war with the internationally recognized government as well as southern separatists, local militias and Sunni extremists.

The United Arab Emirates military announced the death of another of its soldiers in Yemen, Khamis Rashid al-Abdouly. A statement said he died while being treated in Germany after succumbing to wounds sustained “at the battle for Marib.” It did not say when he was wounded.

The U.N. says at least 2,355 civilians have been killed in fighting in Yemen since March, when a Saudi-led coalition began launching airstrikes against the Houthis and their allied army units.

All officials spoke on condition of anonymity because they were not authorized to speak to reporters.