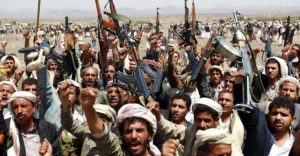 Yemen’s Houthi group threatened to target all airports, ports and areas of interest in countries that belong to the Saudi-led military coalition that fights the Iran-backed militia in Yemen, like reported by middleeastmonitor.com.

“All airports, ports, border crossings and areas of any importance to Saudi Arabia and the UAE will be direct targets of our weapons, which is a legitimate right,” read a statement released by the Houthis’ political office.

This comes after the Saudi-led coalition’s leadership had announced the temporary closure of all air, sea and land borders in Yemen after the Houthis launched a ballistic missile towards Riyadh airport on Saturday.

The Supreme Political Council, formed by the Houthis and Yemen’s former President Ali Abdullah Saleh’s party, said that it would not stand idly by and will consider more decisive options to prevent further blockades and starvation of Yemenis. In the statement, the Houthis also criticised the prevention of the entry of basic materials and oil derivatives into the port of Hudaydah.

The group condemned statements made by the coalition accusing Iran of smuggling missiles to them and the listing of some 40 Houthi members on a Saudi wanted list.

Riyadh is leading a coalition of Arab states which began launching airstrikes in Yemen in March 2015 to restore to power ousted President Hadi, who was driven from the capital in 2014 by Houthi fighters and militias allied with former President Ali Abdullah Saleh.