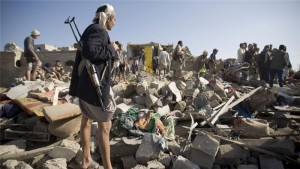 Abd-Rabbu Mansour Hadi, president of Yemen’s exiled government, has told the UN it is ready for a ceasefire under certain conditions.

The Houthi rebels rejected the offer, claiming it does not address the humanitarian crisis.

The guarantees set for the truce by Hadi include release of prisoners by Houthi rebels and a Houthi withdrawal from four southern and eastern provinces.

“The Yemeni authorities have informed the secretary general of the United Nations Ban Ki-moon of its agreement to implement a truce in the coming days,” government spokesman Rajeh Badi told Reuters.

The UN is said to be seeking clarifications from both sides.

Houthi leader Zeifullah al-Shami told AP the UN-sponsored talks that began on Sunday are continuing in the capital Sana’a.

A Saudi Arabia-led coalition has been bombing the Iran-backed Houthis and their allies in Yemen’s army in an effort to restore Hadi, who is in exile in Saudi Arabia.

A near-blockade imposed by an alliance of Arab states aimed at weapons deliveries to the Houthis has in turn seen most of the aid lying waste in Djibouti.

A UN team has been working to secure a ceasefire at least for the remaining days of Ramadan.

More than 3,000 people have been killed and a million displaced since March, when a coalition led by Saudi Arabia began its air blitzkrieg of the impoverished Arab peninsula.