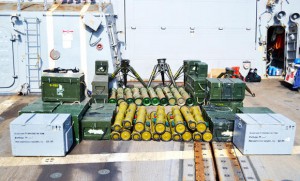 Despite the naval blockade imposed by coalition forces in Yemen since the launch of “Decisive Storm” in March 2015, Houthi rebels and their ally ousted President Ali Abdullah Saleh are still receiving high-tech and numerous military weapons from different sources in order to continue their war against Yemeni citizens.

However, facts showed that countries in the region facilitated the smuggling of arms without taking into consideration the U.N. resolutions and imposed sanctions.

Moreover, information provided indicated that Ali Saleh and his Houthi allies were working earlier and preparing for a coup d’état through regional support and arm dealers, which disclosed the scheme that targeted Yemen and other regional countries and answered the question regarding people’s money put in the central bank’s treasury that are estimated to be around $5 billion dollars in addition to government revenues that are also estimated to be millions of Yemeni Riyals.

In the journalistic investigation, which was published by Reuters on Tuesday, and took place in Brazil, new facts regarding arms smuggling and dealing were revealed.

The report explained that these deals were concluded through mediators and international arm dealers, who had close relation with the regime of ousted President Ali Abdullah Saleh.

Brazil’s Forjas Taurus SA, the largest weapons manufacturer in Latin America, sold guns to a known Yemeni arms trafficker, who funneled them into his nation’s civil war in violation of international sanctions, according to charges in court documents reviewed by Reuters.

Federal prosecutors in southern Brazil charged two former executives of Forjas Taurus (FJTA4.SA) in May with shipping 8,000 handguns in 2013 to Fares Mohammed Hassan Mana’a, a Yemeni arms smuggler active around the Horn of Africa for over a decade according to the United Nations.

The handguns were allegedly shipped by Taurus to Djibouti and redirected to Yemen by Mana’a, according to court documents.

Alexandre Wunderlich, a lawyer for the two former Taurus export executives, Eduardo Pezzuol and Leonardo Sperry, said the accusations in the sealed indictment “do not reflect the facts of the matter.”

Mana’a, who served from 2011 to 2014 as governor of Sa’dah, a Houthi stronghold, could not be reached for comment.

A Brazilian court issued a public summons for Mana’a in May as part of a case citing him, Sperry and Pezzuol as defendants.

Taurus declined to answer detailed questions on the weapons case due to legal confidentiality but said it was “helping the courts to clarify the facts.”

Prosecutors say the two former Taurus executives were negotiating another shipment of 11,000 guns with Mana’a last year when police uncovered the plot and raided the company’s offices in November.

Prosecutors have not brought charges against Taurus but said evidence seized in the raid included dozens of emails showing it knew of U.N. sanctions against trading arms with Mana’a and Yemen but sought ways to skirt them.