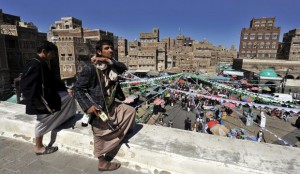 The Houthi movement currently in control of large parts of Yemen have withdrawn some of their militias from the southern port city of Aden to other parts of the country in order to counter resistance from volunteer groups loyal to Yemen’s internationally recognized President Abd Rabbuh Mansur Hadi, security and military officials have said.

The officials told the Associated Press that two divisions from Yemen’s Republican Guard and Special Forces—who are loyal to ex-president and Houthi ally Ali Abdullah Saleh—withdrew from the city in order to reinforce Houthi positions in the capital Sana’a and the group’s northern stronghold Saada province.

The Iran-backed Houthis, who launched a coup deposing Hadi and his government in February, are currently locked in fighting with the Hadi volunteer loyalists, known as the Popular Resistance, across the country.

Aided by Saudi-led airstrikes targeting Houthi positions in Yemen since March, the volunteers have stepped up their fight against the Houthis in recent weeks, especially in the capital Sana’a which the Houthis currently control.

The Popular Resistance has also received support on the ground from fighters belonging to the Southern separatist Al-Hirak movement.

On Saturday, a source from the Popular Resistance told Asharq Al-Awsat 650 Al-Hirak fighters who have been receiving training in Saudi Arabia arrived in Aden and were readying to join the fight for the city in the coming days.

The source said plans were underway to form a joint military council in Aden in the coming days to coordinate the various groups fighting the Houthis in the country’s southern region, saying it was likely one of President Hadi’s military advisers would be heading the body.

Meanwhile, on Saturday the Houthis attacked a major oil refinery in Aden. The facility formerly had an output of 150,000 barrels per day (bpd) before being shut down in April. Yemen, the Arabian Peninsula’s poorest country, relies heavily on oil for its national income, but the country’s lucrative oil and gas sector has practically ground to a halt since the current crisis began.

Meanwhile, UN Special Envoy for Yemen Ismail Ould Cheikh Ahmed will travel to Kuwait City, Riyadh, and finally Sana’a in the coming days in a bid to broker a political solution between the Houthis and the government. This comes following UN-sponsored peace talks in Geneva which ended on June 19 without either side reaching any kind of agreement to end the crisis in the country.

An informed source told Asharq Al-Awsat Ould Cheikh Ahmed would be pursuing at least to secure a humanitarian ceasefire in the country to last until the end of the Muslim holy month of Ramadan, which ends on June 17.

The UN envoy will be meeting with members of Yemen’s government-in-exile in Kuwait and Riyadh, the source said, and will be looking to put pressure on the Saudi-led coalition to begin the ceasefire.

A truce offer was previously extended to the Houthis in May by the coalition.

“The leadership of the [Saudi-led] coalition offered a five-day ceasefire to the Houthis before, stipulating the end of fighting in exchange for the entry of humanitarian aid to the country, but the rebels [the Houthis] . . . refused this, also stealing some of the aid as well as delaying the delivery of some of it, so it did not reach some parts of Aden, Taiz, or Al-Dalea,” the source said, speaking via telephone.

“[The Houthis] began firing again during the first hours of the ceasefire, targeting the Saudi border.”