You are here: Home / MidEastGulf / Yemen: Houthis kidnap 600 civilians to use as human shields 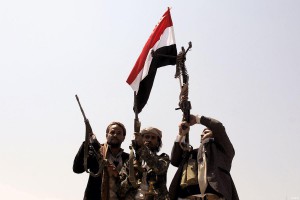 More than 600 civilians have been kidnapped and are being used as human shields by forces loyal to ousted Yemeni President Ali Abdullah Saleh and the Houthis.

According to the Saudi Press Agency, Yemeni media today quoted local sources in Ibb province saying that the militias kidnapped 600 civilians since Saturday.

According to sources, the kidnapping and detention of a large number of civilians in the region came after fighters in the area were targeted by the Saudi-led coalition killing dozens of soldiers and officers. The area is one of the most important militia camps in central Yemen.

The same sources pointed out that the kidnappings and detentions affected civilians belonging to areas which have been killed of Houthi and Saleh fighters. Civilians have been accused of being loyal to the Saudi-led coalition and orders have been handed down for them to be used as human shields should the coalition launch new raids in the area.