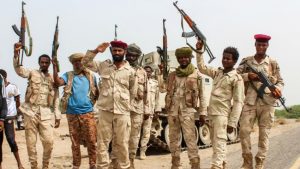 At least five Houthi rebels were killed in clashes with government forces in Al-Hudaydah province in western Yemen, the Yemeni army said Monday.

The rebels were killed after they tried to infiltrate Al-Tuhayta district south of Al-Hudaydah, according to a military statement.

No information on casualties from government forces has been reported so far.

Yemen has been beset by violence and chaos since 2014, when Houthi rebels overran much of the country, including the capital, Sanaa.

The crisis escalated in 2015 when a Saudi-led military coalition launched a devastating air campaign aimed at rolling back Houthi territorial gains.

Tens of thousands of Yemenis, including civilians, are believed to have been killed in the conflict, which has led to one of the world’s worst humanitarian crisis as millions remain at risk of starvation.