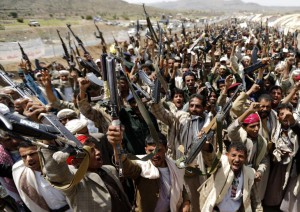 In a news flash on the group’s official television channel, the governing body said it “calls on the masses of the Yemeni people to rally and protest on Thursday to condemn the Security Council resolution in support of the aggression”.

A Saudi-led coalition has been bombing Yemen for three weeks to stem the advance of the Iran-allied movement and to back fighters defending Yemen’s south amid fierce battles.