The current conflict provides ‘no justification’ for torture and disappearance of opponents, says the group 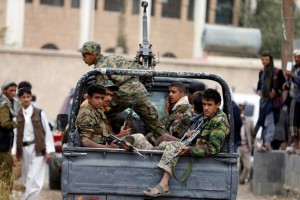 The group said it had documented two deaths in custody and 11 cases of alleged torture, one of a child.

It said they were among hundreds of reported cases of arbitrary detention by the Shiite Houthi rebels and their allies – renegade troops loyal to ousted strongman Ali Abdullah Saleh.

The rebels are battling government forces who are backed by a Saudi-led coalition, which intervened in March 2015 when President Abedrabbo Mansour Hadi fled into exile.

“The authorities (in Sanaa) should free those wrongfully held immediately, end detention without access to lawyers or family members, and prosecute officials responsible for mistreatment,” HRW said.

“The conflict with the Saudi Arabia-led coalition provides no justification for torture and ‘disappearance’ of perceived opponents,” it added.

In August and September 2016, HRW interviewed five former detainees and 19 relatives and friends of those detained in Sanaa and elsewhere in Yemen.

“The conflict with the Saudi Arabia-led coalition provides no justification for torture and ‘disappearance’ of perceived opponents,” said Sarah Leah Whitson, Middle East director at HRW.

“The Sanaa authorities put themselves at risk of future prosecution if they don’t account for the people who are wrongfully detained and return them to their families,” she added.

Since August 2014, HRW has documented the Sanaa-based authorities’ arbitrary or abusive detention of at least 61 people. The authorities have since released at least 26, but 24 remain in custody and two died during detention.

Scores of detainees are also being held at non-official detention sites.

Abdul Basit Ghazi, a Yemeni lawyer who heads the nongovernmental Defense Authority of Abductees and Prisoners, told HRW that his organisation was working on behalf of more than 2,500 detainees and disappeared people.

He said that as of August, the Sanaa-based authorities were holding at least 650 people in the Habra and al-Thawra pretrial detention facilities, another 660 to 700 in Sanaa Central Prison, and 30 to 40 at the Criminal Investigation Department (CID) in Sanaa.

Under international human rights law, an enforced disappearance occurs when the authorities take someone into custody and deny holding them or fail to disclose their fate or whereabouts. “Disappeared” people are at greater risk of torture and other ill-treatment, especially when they are detained outside formal detention facilities, such as police jails and prisons.

The United Nations says more than 7,000 people have been killed and nearly 37,000 wounded since the coalition intervention started. Millions more are in desperate need of aid.