You are here: Home / MidEastGulf / Yemen: Houthi prisoners sold to IS for ‘Hollywood-style’ execution 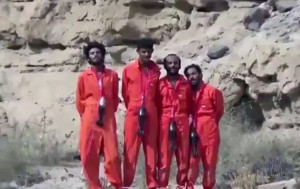 Houthi prisoners were sold to the Islamic State group by Yemeni tribes to be executed for propaganda value, Yemeni sources have claimed.

“The Yemeni branch of IS paid to buy the Houthi prisoners, and then executed them in a Hollywood-style video,” anonymous Yemeni security sources told the Arabi21 website.

The killings are understood to have taken place in Yemen’s southern Abyan province that borders Aden to the east.

A Twitter user known to be supportive of the Yemeni branch of IS reported on the killings in September, saying the group had bought the prisoners from a “specific source” while also claiming that IS was handed some Houthi prisoners by the anti-Houthi coalition known as the Popular Resistance.

However, Nasser al-Sakkaf, a Yemeni journalist and MEE contributor, said that the Houthis prisoners had been handed over by former members of al-Qaeda in the Arabian Peninsula (AQAP) who had left the group to join IS.

Since the violence escalated in Yemen earlier this year, IS has managed to expand its presence staging a number of high-profile attacks, including several bombings of Shia mosques.

According to al-Sakkaf AQAP has been “fighting shoulder to shoulder with the resistance in different provinces”. But he denied that the tribes were involved in the exchange, dubbing this a “rumour”.

The Houthis rebels are overwhelmingly from the Zaidi sect and are seen as infidels by the Islamic State group. In September 2014, the Houthis seized the capital Sanaa before surging south this year and capturing large swathes of the country.

The Popular Resistance groups were set up to counter their advance, and are made up of a loose coalition of Southern Movement fighters, Salafists and local militias.

AQAP has also expanded its presence in Aden and other provinces since the Saudi-led coalition retook the southern capital from the Houthis in July.