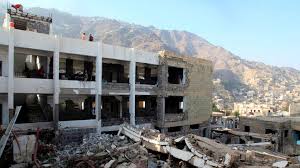 Three children and 15 soldiers died in a Houthi missile attack on Sunday on a school in Yemen, like reported by arabnews.com.

Military sources said the school in Kadha district in the west of Taiz governorate had previously been used as a base by the Iran-backed militia, and was recaptured when pro-government fighters seized Kadha last week.

The 15 government soldiers were inside the school when the Houthi missile struck. The dead children, two brothers and a relative, were near by.

Fighting has recently escalated in Taiz in southwestern Yemen between the Houthis and fighters loyal to the internationally recognized government.

The Yemeni army’s demining teams spent Saturday and Sunday clearing dozens of land mines planted by the Houthis in the recently liberated areas west of the city of Taiz.

“There are less intense clashes between the national army and the Houthis in different locations in Taiz on Sunday. The army is currently defusing land mines and securing liberated areas,” Al-Baher said.

Elsewhere, fighting raged between Yemeni government forces and the Houthis over the previous 24 hours in Abbes and Mastaba in the northern province of Hajja, after the Houthis launched a counterattack to recapture areas that had fallen to loyalists. Dozens of rebel fighters were killed in the fighting after failing to make any progress.

Warplanes from the Saudi-led Arab coalition played a key role in defeating the Houthis on Hajja’s battlefield after targeting their military equipment and gatherings of fighters. Images of burnt tanks and armored vehicles circulated on social media on Sunday.

The clashes in Taiz and Marib in the north come as the US and the UN intensify efforts for a cease-fire to revive UN-sponsored peace talks.

The US envoy to Yemen said last week that a “sound plan” for a truce had been with the Houthis for “a number of days” but they were prioritising their offensive in Marib.