You are here: Home / MidEastGulf / Yemen: heavy clashes as Houthis dig in near Hodeidah university 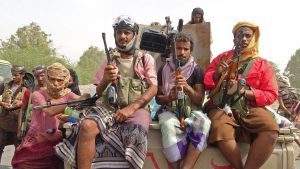 Yemeni government forces engaged in fierce clashes with Houthi rebels who entrenched themselves near the University of Hodeidah and the Al Rabsa neighbourhood in the south-west of the port city, like reported by thenational.ae.

The Yemeni Joint Resistance forces had imposed a tight cordon around the Houthis, who retreated into the residential areas in the centre of the city,” Col Mamoon Al Mahjami, spokesman of the Al Amalikah Brigades, told The National.

“The rebels stationed artillery and mortars in populated neighbourhoods and hundreds of snipers on the roofs of buildings near the university,” Col Al Mahjami said

Residents in the southern outskirts of the port city said the battle had been raging since early Sunday morning, with huge explosions around of the university as well as in the 7 July neighbourhood in the east of the city.

Aircraft from the Arab Coalition supported the government troops, with Apache helicopters launching several strikes at Houthi fighters near the university and in the eastern areas of the 7 July district and the Al Khamseen Street area in the north-east of the city.

The residents said four civilians were injured in the fighting, three of them children.

“The Houthi militia has been shelling the southern areas of the city randomly with mortars and with rockets which has spread fear and anxiety among the residents who haven’t fled the city and those who have been prevented from leaving the city centre by the Houthis to use them as human shields,” a resident who asked not to be named told The National.

The resident said many people in Hodeidah who had co-operated with the Iran-backed rebels now wanted to defect to the government side. However, they feared reprisals because some activists in areas of Hodeidah that were already liberated had been threatening collaborators on social media, forcing those who wanted to defect to keep fighting for the Houthis.

The Houthi fighters had also taken up positions near Al Thawra hospital, the city’s biggest, staff there told Reuters.

Sources at the hospital said several staff members and patients able to move had fled the complex. It was not clear how many patients remained inside.

“The Houthis are reinforcing their positions near the hospital and that is what scared people,” a staff member said.

Hospital spokesman Khaled Attiyah told Reuters that doctors and nurses continued their work in departments such as intensive care, the burns ward and the emergency room “despite the panic”.

“We hear loud shelling and they are using all kinds of weapons, it is terrifying,” said resident Abdullah Mohammed. “In the eastern suburbs, Apache helicopters are bombing Houthi positions all day long.”

Last week, rights groups said the Houthis had raided the May 22 hospital in the city’s eastern suburbs and posted gunmen on the roof, endangering doctors and patients.

Recapturing Hodeidah would return the city’s vital port to the control of the government. About 80 per cent of all food and aid entering Yemen passes through the part, raising fears that prolonged fighting in the city could worsen the already dire humanitarian situation in the country after more than three years of conflict.

The Arab Coalition, which is supporting the government, has said that taking control of Hodeidah would cut off the Houthis’ main supply line and force the group to the negotiating table.