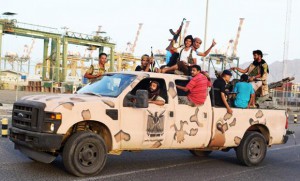 Security officials say gunmen on a motorcycle shot dead the head of security in Yemen’s port city of Aden.
The officials say Col. Abdelhakim Al-Sanidi was killed Sunday while driving on a busy street in Al-Mansoura neighborhood.
No group immediately claimed Sunday’s attack, but some officials say they suspect Al-Qaeda because hitting a moving target from a speeding motorcycle requires specialized training, and because the group has used motorcycles in previous assassinations.
Meanwhile, President Abed Rabbo Mansour Hadi said on Saturday that his forces were battling Shiite Houthi rebels across the country to check “Iranian expansion” in the region.
Hadi was speaking as he made a short visit to Sudan, which was seen as being close to Iran before it joined a Saudi-led coalition against the Yemeni rebels in April.
“We are currently leading a war based on stopping Iranian expansion in the region,” Hadi said at a press conference with his Sudanese counterpart Omar Bashir.
“Iranian expansion is present now in Iraq, Syria, Lebanon,” Hadi said. Hadi said rebel forces had been pushed back in recent weeks.
“Now there are few provinces where battles are still going on. There is fighting in Taez, and Ibb and Hodeida and Marib,” he said.