You are here: Home / MidEastGulf / Yemen: five killed including police colonel in Aden 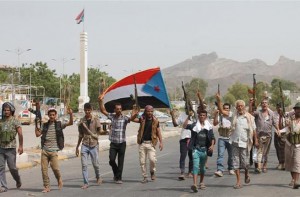 A police colonel and four others were killed by unidentified gunmen in a string of attacks targeting security forces in the war torn city of Aden in Yemen.

The attackers opened fire on Colonel Taha al-Sobeihi in a police vehicle in Mansura district on Sunday, killing him and his bodyguard as well as a female bystander, according to reports given by a security official.

Al-Qaeda and the rival Daesh group both have a presence in the city, where extremists occupy government buildings, patrol several districts and intimidate civilians.

The incident came as part of a string of attacks and assassinations which has gone on over recent months.

A soldier was also killed late Saturday in Mansura, a security official said.

The victim was recruited into a new force that is loyal to President Abedrabbo Mansour Hadi and trained by the Saudi-led coalition, which launched a military campaign in March targeting rebels who had taken over large areas of the country.

Hadi designated Aden as his government’s temporary capital after rebels backed by Iran stormed the capital Sanaa in September 2014.

Rebels circulated pamphlets in mosques, warning men against joining the new force against Houthi insurgents, saying it would “bring back tyranny”, residents said.

Another man was killed Saturday when gunmen botched an attempted kidnapping of him and his father in Aden’s Crater district, a security official said. The two belonged to the Shia Bohra minority.

Four members of the Bohra community have been kidnapped by “extremists” in the past week in Aden. Three have already been released according to a security official.

In the meantime, suspected Al-Qaeda militants bombed a vacant police station in Huta, Lahj province, an area controlled by forces loyal to Hadi.

Hadi returned to Aden after loyalists, with the support of coalition forces, ousted rebels and their allies from the city and four other southern provinces in the summer.

President Hadi fled to Aden from the rebel-held capital Sana’a last February, but a Houthi advance on the south resulted in him fleeing to Riyadh in March.