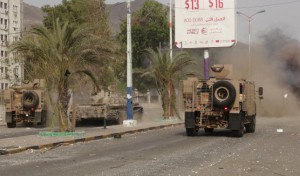 Local fighters and army units backed by Yemen’s exiled government have taken control of Tawahi, the last district of central Aden still held by the Houthi militia and its allies, a spokesman for the fighters said on Monday.

The fighters, aided by a Saudi-led coalition, broke months of stalemate in Aden last week by suddenly seizing the airport and advancing into other parts of the port city held by the Houthis and forces loyal to former president Ali Abdullah Saleh.

Fighters from the Southern Resistance, which wants the former state of south Yemen to break from the north after 25 years of unification, entered Tawahi, at the tip of Aden’s peninsula, late on Sunday after securing the Crater district.

They took control of the television and radio buildings, and army and security bases in violent fighting, the group’s spokesman Ali al-Ahmadi said.

Local fighters and Yemeni army units are also battling the Houthis and Saleh’s forces around important military bases in Lahj province, to Aden’s north, and in Abyan province, along the Indian Ocean coast east of the city.

Fighting continues between local coalition-backed fighters and the Houthi militia and Saleh’s forces in Taiz, a major central city north of Aden, in Marib, a tribal area east of Sanaa, and around al-Dhala, northeast of Aden.

Although the Southern Resistance and other local groups are backed by exiled President Abd-Rabbu Mansour Hadi and his government in Riyadh, it is not clear whether they would eventually support his reinstatement.

Saudi Arabia started air strikes against the Houthis and Saleh’s forces on March 26 in an effort to stop them taking Aden, the last city nominally controlled by Hadi’s government, and to restore the president to power in Sanaa.

Riyadh fears its main regional foe Iran will use its alliance with the Houthis to project power into Yemen, eventually threatening the kingdom’s southern border.