You are here: Home / MidEastGulf / Yemen, end of the Houthis? 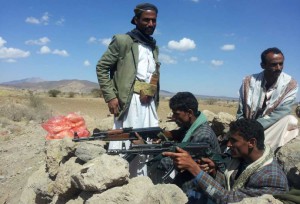 Thirteen months ago the Iranian-backed Houthi stormed into Sana’a taking control over large swathes of Yemen in the process. Attempts between the group and the incumbent President Abd Rabu Mansur Hadi to cooperate eventually collapsed leading to the premier’s escape into exile in February of this year. An air campaign led by Saudi Arabia followed, reversing much of the territorial gains made by the Shi’ite militia.

As a result the Houthi have recently announced that its fighters will withdraw from the remaining territory they hold, signaling what could be the beginning of the end of the country’s civil war. The Media Line spoke to Yemenis and representatives of the group to ask them what they believed had been achieved in the year-long Houthi rule.

The group’s first achievement was in preventing Saudi Arabia from breaking Yemen into numerous small regions, Abu Mohammed Al-Marwani, a Houthi leading figure, told The Media Line. “We are fighting a war to define the fate of Yemen: either we escape (Saudi) control or remain slaves to them. We are determined to defeat them in order to have the right to decide our destiny,” Al-Marwani said.

The Houthi commander also claimed that his organization had contributed to the fight against al-Qa’ida by pushing the group into the province of Hadramout.

“The US and other parties were able to kill the leader of al-Qa’ida in Yemen, Nasser Al-Wuhaishi. If we had not cornered them in Hadramout, America would not have been able to kill him,” Al-Marwani argued. The local franchise of the jihadist organization, known as al-Qa’ida in the Arabian Peninsula (AQAP) was for some time considered the most dangerous branch of the Sunni extremist network, having attempted a number of sophisticated bomb attacks against US interests.

Al-Marwani added that his organization had done much to reduce banditry in Yemen which previously plagued rural roads and had tackled corruption within government ministries.

“The Houthi made a huge mistake when they entered Sana’a at gunpoint and turned against the government,” Hussam Murshed Badi, an expert who follows armed organizations, told The Media Line. Badi accused the Houthi of orchestrating an energy crisis and of allowing a black market to flourish in order to provide back channel funds to its fighters. As part of this process all gas stations were closed down so that demand on the illegal market, and thus prices would soar, Badi alleged.

“We used to accuse the former regime of corruption,’ he said. “But those (the Houthis), the least we can call them is thieves. They have made millions of people homeless and hundreds of thousands unemployed.’

While Badi conceded that the Houthi did help suppress AQAP in some parts of the country, he suggested that elsewhere the group had expanded. Its enemies distracted and fighting each other, al-Qa’ida rearmed and expanded in the Hadramout area, Badi said.

“It’s true that the Houthis have caused destruction, but if they were given a chance, they would have achieved things,” Mohammed Al-Anesi, a citizen in Sana’a, told The Media Line.

Mohammed Al-Qadri, another resident of Sana’a, agreed with Al-Anesi describing an incident where his taxi, his primary source of income, was stolen at gun point by ten armed men. Local police refused to help Al-Qadri retrieve his automobile. But when the Houthi arrived in the city they quickly enacted justice, Al-Qadri said, explaining, “I got my car back and the bandits were detained.”

Other Yemenis support the Houthi not for their appreciation of the group or its ideology but because of a desire to hit back at Saudi Arabia, who they see as an aggressor towards their country.

“The Houthis are the cause of all the blights of Yemen… but I am fighting for them right now, (because) we have a common enemy – Saudi Arabia,” Mujahid Al-Anesi, a resident of Dhamar, told The Media Line. Women, children and elderly people being killed by Saudi bombs had motivated Al-Anesi to fight against the Saudis, but later it would be the turn of the Houthi, the fighter said.

“There is an old Yemeni proverb that says my cousin and I are enemies until the stranger comes, and then we fight him together,” Al-Anesi explained.

Several citizens said they were not originally sympathetic to Houthi rule but had come around to supporting the group due to their anger at Saudi Arabia’s intervention in Yemen. Some individuals have even joined the fighters of the Houthi as a result.

The Houthi declared that they will withdraw from Sana’a and relinquish territory previously taken in order to end the suffering of the people of Yemen, Mohammed Al-Bukhaiti, a member of the organization’s political office, told The Media Line. The Houthi will comply with the United Nations’ Security Council (UNSC) directive 2216 providing it is overseen by the UN itself, Al-Bukhaiti said.

“We made concessions to end the suffering of Yemenis caused by the Saudi bombardment that spared nothing and no one,” the Houthi political officer declared.

However an exclusive source within Prime Minister Khaled Mahafoudh Bahah’s cabinet divulged to The Media Line that the government had no faith in the Houthi’s word.

“The legitimate government does not believe the Houthi, therefore (President) Hadi’s government and the coalition will condition that their forces replace the Houthi’s to ensure that the latter’s forces will actually withdraw,” the source said.