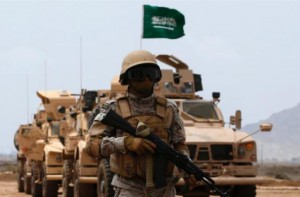 According to Yemeni media reports, at least three soldiers were killed by sniper fire near Yemen’s Midi region on the border with Saudi Arabia’s Jizan Province on Sunday.

Five other Saudi forces were killed at the hands of Yemeni forces in a similar fashion in Jizan’s al-Tawal region.

Fighters from the popular committees, backed by Houthi fighters, alongside Yemeni army soldiers are carrying out attacks against Saudi military positions.

Saudi Arabia launched its military aggression in Yemen in March 2015 to undermine the popular Houthi Ansarullah movement and restore power to the embattled president Abd Rabbuh Mansur Hadi, who is a staunch ally of Riyadh and fled to the kingdom in the face of Houthi’s increasing advances.

More than 8,278 people have been killed and over 16,000 others injured since the attacks began. The war has also devastated the country’s facilities and infrastructure.