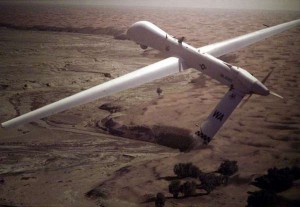 A US drone strike has killed four suspected members of Al-Qaeda in central Yemen, a security official said today.

The raid targeted their vehicle yesterday near the border of Baida and Shabwa provinces, the official said.

The United States is the only country known to operate armed drones over Yemen.

It has kept up strikes on militants during months of fighting between pro-government forces and Shiite Huthi rebels who control the capital.

Yemen, home to what the United States considers Al-Qaeda’s most dangerous affiliate, has been convulsed by unrest since the Iran-backed Huthis seized Sanaa in September last year.

Al-Qaeda in the Arabian Peninsula (AQAP) has exploited the turmoil to tighten its grip on parts of southeast Yemen, including Mukalla, the capital of Hadramawt province, imposing a strict form of Islamic law.

Islamist militants, including AQAP and the Islamic State group, have also gained ground in and around the main southern city of Aden, where a Yemeni naval officer was shot dead overnight by unknown gunmen, security officials said.