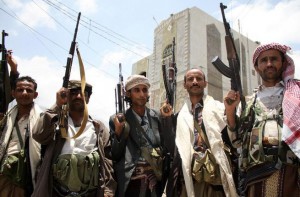 The leader of the 37th brigade has rejoined the legitimate government of Yemen, which should be a further sign for the rebels to lay down their arms, according to the Saudi-led coalition.

“This is a clear signal for the Houthi militias and their supporters that this is the right time to surrender and help distribute relief aid,” Brig. Gen. Ahmad Al-Assiri, coalition spokesman and adviser in the office of the defense minister, said at his daily press briefing on Monday at the Riyadh Air Base.

Al-Assiri said that the militias are still hampering relief operations with one plane unable to take off at 6 a.m. on Sunday. “The plane of Doctors Without Borders could not leave because of fake air traffic by the Houthi militias,” Al-Assiri said.

He said the coalition’s operations have proceeded to the second phase “to prevent the Houthi militias and their cohorts from causing problems on the ground for planes used in relief operations.”

He said that Operation Decisive Storm has achieved its goal of preventing the militias from causing instability in neighboring countries. “We have achieved the objective of neutralizing the Houthi militias on the ground. Hence, we have moved to the second phase,” he said.
Al-Assiri said that on Sunday, the coalition carried out 128 sorties “but this does not mean we have changed our strategy.”

Meanwhile, a border guard officer died and two soldiers were injured in a Houthi mortar attack on Saudi forces stationed in Al-Sadd, Najran on Sunday. The Interior Ministry identified the slain officer as Saleh Manie Al-Mahamidh. The injured soldiers have been taken to the Armed Forces Hospital in Khamis Mushait.