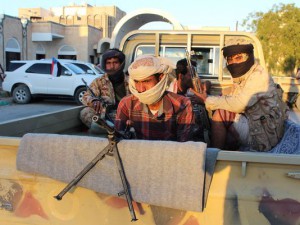 A governor in southern Yemen has declared a nighttime curfew for the port city of Aden in a bid to push back against recent incursions by al-Qaida and other Islamic militants.

Aidarous al-Zubaidi says the 8 p.m. to 5 a.m. curfew will go into effect on Monday night. Over the weekend, government forces retook Aden’s strategic port after heavy clashes with militants who had seized it earlier.

Al-Qaida and other militants have been using the port for lucrative smuggling operations.

Yemen’s al-Qaida branch has exploited the chaos of the country’s civil war to stage significant land grabs and expand its footprint in the south.

The conflict in Yemen pits the internationally recognized government, backed by a Saudi-led coalition against Shiite rebels, known as Houthis, allied with a former president.