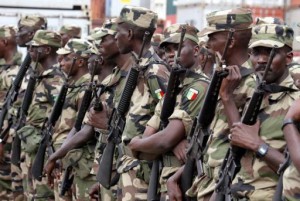 Senegal announced that it would send 2,100 soldiers to Saudi Arabia to join the Riyadh-led coalition that has been conducting airstrikes against Shiite Houthi rebels in Yemen since late March. The move reportedly came in response to a Saudi request to help secure the kingdom’s border with Yemen.

The announcement was made by Mankeur Ndiaye, Senegal’s foreign minister, who did not say when the soldiers would be deployed, Agence France-Presse (AFP) reported. According to Ndiaye, Riyadh had asked Dakar in April to contribute to the Saudi-led coalition, which has been trying to halt the rebellion in Yemen, and bring the country’s internationally recognized leader, President Abed Rabbo Mansour Hadi, back to power.

Senegalese President Micky Sall “decided to respond favorably to this request by deploying a contingent of 2,100 men to the holy land of Saudi Arabia,” AFP quoted Ndiaye as saying. “The terms and other necessary arrangements for the deployment were made between the chiefs of the armed forces of the two countries.”

Senegal’s decision to support the Saudi Arabia-led coalition came under fire from domestic leaders in the majority Sunni Muslim country. “Saudi Arabia isn’t threatened and neither are Islam’s holy sites,” BBC quoted Modou Diagne, an opposition politician, as saying. “There is nothing to justify a military intervention by Senegal.”

Senegal had previously deployed soldiers to the Middle East as part of an international coalition that liberated Kuwait after Iraq’s invasion of the country in 1990. Following its independence from France in 1960, Senegal has deployed about 25,000 soldiers in more than 20 “peacekeeping operations,” AFP reported, citing Ndiaye.