You are here: Home / Africa / Yemen crisis could open jihadis path through Somalia 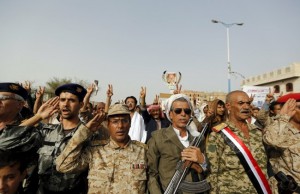 Secretary-General Ban Ki-moon warned in a new report that the crisis in Yemen could open a corridor for jihadi movements through Somalia, which is located just across the Gulf of Aden.

Ban said in a report to the U.N. Security Council circulated Monday that security in Somalia and the region is threatened by the Islamist militant group Al-Shabab. He pointed to continuing Al-Shabab attacks in Somalia’s capital Mogadishu and the country’ central and southern regions as well as increased activities in Somalia’s semi-autonomous region of Puntland and the massacre of 147 students at Garissa University College in neighboring Kenya in April.

“At the same time, the crisis in Yemen has the potential to further destabilize the region and open a corridor for jihadi movements through Somalia,” Ban warned.

Yemen had long suffered from desperate poverty, political dysfunction and Al-Qaeda’s most dangerous offshoot. It became more unstable in recent months as Houthi rebels, who are Shiite, seized much of the country and chased Yemen’s internationally recognized president into exile. That prompted the Saudis and other Gulf Arab states to intervene.

The U.N. chief said he remains “greatly concerned” about security in Somalia, the increased Al-Shabab activity in Puntland, “and the security implications of developments in Yemen.”

The Security Council is scheduled to discuss the report Tuesday.

Somalia has been trying to rebuild after establishing its first functioning central government since 1991, when warlords overthrew a longtime dictator and turned on each other, plunging the impoverished nation into chaos. The country’s weak government is being supported by African Union troops against Al-Shabab insurgency.

Ban said it is essential that the joint military campaign by the AU force, known as AMISOM, and the Somali national army continue and be supported financially by the international community. He said he expects to present a report to the Security Council on progress toward meeting its benchmarks that would lead to the United Nations taking over peacekeeping duties in Somalia.

He expressed concern at the impact of a crackdown on money transfer companies which provided remittances to an estimated 40 percent of the population. He called on member states to come up with new ways to transfer money from abroad, pending the creation of “formal banking arrangements in Somalia.”