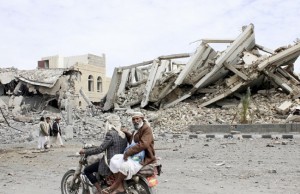 Saudi-led forces said Thursday they would respond harshly against Yemen’s Houthi rebels following attacks on citizens in border areas, hours after the kingdom offered a five-day humanitarian truce if the militia stopped fighting.

Brig. Gen. Ahmad Asiri, spokesman for the Saudi-led coalition, said the Houthis had changed the situation by targeting cities in recent days, and vowed that the coalition would go after leaders of the rebel group.

“The Houthis are now targeting the borders of the kingdom and the situation is that we will defend our citizens,” Asiri told Reuters, adding that 15 people were wounded in Houthi shelling on the city of Najran Thursday evening.

“Coalition forces will deliver a harsh response starting this moment, so that those who carried out this operation will pay the price,” Asiri said earlier on Saudi state television.

Asiri said Saudi-led forces would keep all options open, but declined to say if a ground offensive was being planned.

The remarks came hours after Saudi Foreign Minister Adel al-Jubeir announced at a joint news conference with U.S. Secretary of State John Kerry that the kingdom was ready to offer a five-day humanitarian cease-fire if the Houthis honored the truce.

“The pause will affect all of Yemen for a period of five days,” Jubeir said. “The actual date will be announced shortly as well as the requirements.

“This is all based on the Houthis complying with the cease-fire.”

International concern about Yemen’s dire humanitarian situation has grown as fighting, airstrikes and an arms embargo have caused civilian deaths, internal displacement, destruction of infrastructure and shortages of food, medicine and fuel.

The offer of a truce came days after the Houthis shelled Saudi border towns, prompting renewed coalition airstrikes in Yemen, and as the rebels advanced into a last central area of Aden, a city whose fate is seen as pivotal to Yemen’s civil war.

Kerry welcomed the Saudi truce offer and said neither Riyadh nor Washington was talking about sending ground troops to Yemen.

Houthi-linked Al-Masirah TV Thursday showed fighters in a key district of Aden, and reported that the presidential palace was in the insurgents’ hands.

In a letter to the United Nations, the Houthis called for international action to stop what they described as Saudi aggression and crimes against the Yemeni people.

Villagers from Yemen’s northern Hajah province say that many residents have left their homes because of the Saudi bombardment and are seeking refuge in other areas where they lack food.

Most of those displaced are from the Haradh district near the border with Saudi Arabia, an area which has come under heavy artillery and air attack since the Houthis shelled Saudi villages from there.

Earlier, the Houthi rebels said they had shelled a Saudi air defense facility north of Najran after killing eight people in the Saudi city Tuesday and Wednesday. Another two Saudis were killed by Houthi shells in Jizan province.

Fighting across Yemen Wednesday killed 120 people, mostly civilians, including at least 40 who were trying to flee Aden in a boat that was struck by Houthi shells, rescue workers and witnesses said.

Military and security officials said the rebel forces advanced on the suburb of Dar Saad, north of the strategic port city of Aden, while fighting intensified in the nearby provinces of Abyan and Taiz.

Al-Qaeda in the Arabian Peninsula said a U.S. airstrike last month killed the senior figure who issued the group’s claim of responsibility for the Charlie Hebdo attack in Paris, according to a report by SITE Intelligence Group.

Nasser bin Ali al-Ansi was killed with other fighters in Yemeni city of Mukalla.