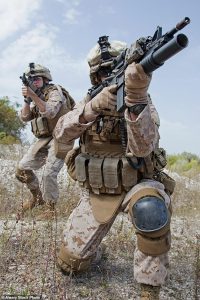 Special forces of the British Army have arrived in Yemen to search for the terrorists who carried out the attack on the oil tanker in the Gulf that killed two people, including a British security guard. London’s Daily Express newspaper reported that it is believed that the Houthis carried out the attack at the behest of Iran. The head of Britain’s Armed Forces, Gen. Sir Nick Carter, called on the West to retaliate for the attack that killed Adrian Underwood, a former British soldier who worked as a security guard for the oil tanker, and the ship’s Romanian captain.

According to the report, a team of 40 soldiers from the SAS that landed at Al Ghaydah airport is apparently being helped by locals, subsidized by the British Foreign Office, who are familiar with the region. The team is said to include an electronic warfare unit that can monitor communications. There is concern that Iran supplied the drones to the Houthis in order to threaten commercial ships.

The Daily Express also reported that American and Israeli intelligence believe that the drone was launched from eastern Yemen and guided by GPS toward the tanker before an operator took control for the last mile, directing the drone into the ship’s bridge. The SAS team is cooperating with a U.S. special operations unit that was already in the region to train a commando unit of the Saudi Army.

A British Army source said that all signs indicate that the drone was launched from Yemen, and that the concern now is that the extended range drone provides the operators with a new capability.