Base sits on key road linked to country’s third-biggest city of Taez, which is under rebel siege, like reported by middleeasteye.net 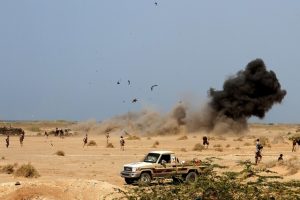 At least 25 rebels and soldiers have been slain in clashes around a key military base near Yemen’s west coast, military and medical sources said on Saturday.

Loyalist forces backed by a Saudi-led coalition launched an assault to seize the Khaled Ibn Al-Walid base from Shia Houthi rebels and their allies who had controlled it for more than two years, military sources said.

After seizing a mountain overlooking the camp in recent days, forces loyal to internationally recognised President Abedrabbo Mansour Hadi had advanced on the camp from two directions, they said.

The camp, one of the biggest in Yemen, is 30km from the government-held Red Sea town of Mokha, which pro-government forces retook in February.

It sits on a key road linking Mokha to the Houthi-controlled port city of Hodeida and the country’s third-biggest city of Taez, which is under rebel siege.

Another 12 rebels and four soldiers were killed in fighting overnight.

Loyalist forces launched a major offensive on 7 January to retake Yemen’s 450km coastline as far as Midi, close to the Saudi border.

The Houthis, supported by troops loyal to former president Ali Abdullah Saleh, control parts of northern and western Yemen and the capital Sanaa, which they overran in September 2014.

Yemen’s long-running conflict escalated in March 2015 when a Saudi-led coalition began bombing raids against the Houthis, who had stormed the capital and taken swathes of central and northern territory.

About 7,400 people have died in air strikes and clashes since then, the UN says. Aid agencies have warned of an impending humanitarian crisis in the Arab world’s poorest nation.