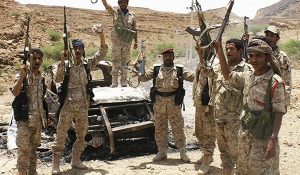 Yemeni National Army units continued their push in the eastern province of Marib, military sources said like reported by aawsat.com.

Yemen’s first group of special commandos managed to penetrate multiple insurgency strongholds in the Directorate of Sarawah in Marib.

An insurgency commander Brig. Gen. Hussein Qasim al-Saqqaf was killed in the attacks launched by government forces three days ago along with a number of his companions, many armed militiamen were captured as well.

According to information gathered from the third military zone in Marib, a commando operation also resulted in the seizure of a large number of documents.

Marib province is among a very few provinces that fought off Houthi military expansion in late 2014, months before Saudi Arabia and allied Arab countries entered the war to bring back legitimate President Abd Rabbo Mansour Hadi to power.

For almost two years, government forces and the Saudi-led coalition have been militarily pressuring rebels to turn over their territories in Marib as to put an end to sporadic rocket attacks on the province’s capital Marib.

The Yemeni National Army had launched a military operation consistent of intensive attacks on remaining coup pockets in Marib, and the army was able to successfully regain full control of the Mukhaddara region, a local told Asharq Al-Awsat.

Increasingly, the army has liberated the once Houthi-run region.

“This qualitative operation backed by air support from the Saudi-led coalition was very impressive and staged operations over the course of 48 hours.” said a field source in Al-Jada’an’s resistance to Asharq Al-Awsat.

Eyewitnesses said that pamphlets urged citizens to cooperate with the pro-government forces and abandon Iran-allied insurgents to face their fate, warning any citizen or tribe from providing any support to insurgency militiamen.

In a related context, aerial bombardment by coalition air forces continued to target insurgency locations near the border in the Hajjah Governorate.

Field sources told Asharq Al-Awsat that there were fierce battles and intense artillery shelling and fire exchange in the Midi and Abs districts.

Sources said that artillery and rocket fire hit other locations in the front of Haradh, especially the area of Wadi Suleiman and the old customs and areas close to the border with Saudi Arabia.