You are here: Home / MidEastGulf / Yemen: Army launches a military operation to liberate areas of Taiz 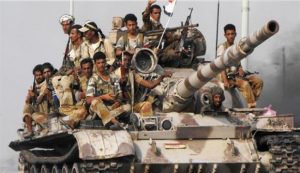 The Yemeni army has launched a large-scale military operation to liberate areas on the western front of Taiz, Yemen, like reported by spa.gov.

A military source in the command of Taiz military front said the army launched attacks against the positions of Houthi coup militias in the area of Madarat, west of the city.

He reported that raids destroyed a militia tank in Hammam farms behind Mount Han and other sites in Madarat area.