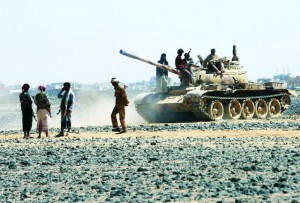 The Arab coalition led by Saudi Arabia used Patriot missiles to destroy the largest storage of Scud missiles at a rebel camp at Baydha’a town in Yemen, according to a report in Al Bayan.

According to sources, the security plan included protecting Ma’arib. The coalition warplanes were not only successful in destroying Scud missiles hidden by Houthi militants but also in targeting ex-president Saleh’s troops in Al Sawadya camp in Al Baydha’a.

Meanwhile, the popular resistance in Ta’aiz province carried out several operations and ambushes killing and wounding dozens of Houthi militia backed by forces loyal to the deposed president.

Popular resistance heroes killed five and wounded three militiamen in Ta’aiz; and dozens were captured in Asrar area of Mawya.

A Presidential directive calls for the merger of the popular resistance forces with the armed forces and other security agencies immediately in order to protect cities.

He said Saleh fancies creating a rift between the state and the Arab coalition, which seeks to restore the legitimacy in Yemen.

Yassin said Houtis prevented him from getting out but now it is clear he would seek to move and use terrorist organizations such as Al Qaeda and Daesh to target Aden – the city which was liberated by the coalition forces.