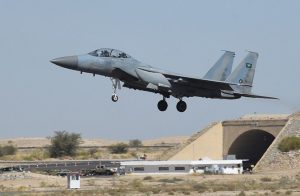 Air raids by the Saudi-led Arab coalition killed several Houthi leaders on the west coast of Yemen while the national army and Popular Resistance advanced towards the eastern areas of Hodeidah, like reported by arabnews.com.

According of the official news site of Yemen’s Ministry of Defense, the air raid targeted the headquarters of the Houthi militia in the district of Zabid, where several field leaders were meeting.

The air strike killed and wounded dozens of Houthis, the report said.

After the raid, the militia cordoned off the area where a number of vehicles rushed to the scene to transport the bodies of the dead and wounded to Hodeidah hospitals, according to eyewitnesses from the area.

Meanwhile, the Yemeni army intensified combing operations in the areas of Tahita, Zubaid and Aldrehami.