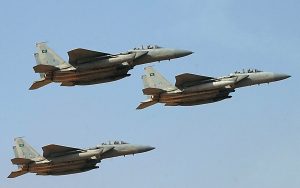 The Arab Coalition has announced the start of military operations in Sanaa and several Yemeni governates, the official Saudi Press Agency (SPA) reported on Wednesday. It comes in “response to the threat and military necessity to protect civilians from hostile attacks”, like reported by alarabiya.net.

Tensions are currently high with Yemen’s Iran-backed Houthis, who continually attempt to attack civilian targets in Saudi Arabia, and more recently in the UAE.

Shrapnel from the destroyed missile fired at Saudi Arabia landed in the town’s industrial zone and only material losses were reported, SPA detailed.

In response, the Arab Coalition has been carrying out attacks against legitimate military Houthi targets in Yemen, warning civilians to not approach or gather around the targeted sites beforehand.

UAE’s Dr. Anwar Gargash, the diplomatic adviser to the country’s president, is among many of the local officials in conversation with global representatives to find a solution to the Houthi issue.

On January 21, Gargash declared that the UAE has a “legal and moral right” to defend itself against terrorist acts by the Houthi militia during a call with Hans Grundberg, the UN Special Envoy for Yemen.

The UAE official also met with the US Special Envoy for Yemen Tim Lenderking, where he reiterated the need for “appropriate international pressure” which may help reach a ceasefire agreement that aids the search for a political solution to the Yemeni crisis, as stated by SPA.

Following the latest attack on UAE soil, the emirates’ forces destroyed the launch site from which the Iran-backed Houthi militia fired two blocked missiles toward Abu Dhabi, according to the UAE Ministry of Defense.

The operation was conducted using an F-16 fighter jet to strike the location in al-Jawf, in northern Yemen.