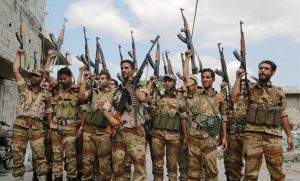 The Coalition to Restore Legitimacy in Yemen announced Tuesday that it will carry on supporting the internationally recognized state in Yemen, noting that its operations, which had inflicted heavy losses on Iran-backed Houthi militias, will continue, like reported by aawsat.com.

Coalition anti-aircraft units had shot down and destroyed four Houthi drones in Yemeni airspace hours after air defenses had intercepted a ballistic missile launched by the militia against Khamis Mushait in southern Saudi Arabia.

Moreover, according to a statement, the Coalition confirmed it has carried out 31 operations against the Iran-backed Houthi militia in Yemen’s Marib and al-Jawf areas.

During the past 24 hours, the targeted operations resulted in the destruction of 20 military vehicles and killed more than 210 militants, including Houthi leaders, the Coalition added.

On Monday, the Coalition had announced staging 28 operations against Houthis in the governorates of Marib and al-Jawf. The operations were conducted within a window of 24 hours.

They resulted in the destruction of 14 military vehicles and the killing of over 140 Houthi terrorists.

In the northern governorate of Saada, Yemeni Army forces were able to thwart a Houthi attempt to infiltrate pro-government positions in the as-Safra district.

“Army artillery targeted Houthi gatherings and reinforcements, which resulted in the killing and wounding of a number of the militia members that tried to infiltrate, while the rest fled,” reported a military source.

In a series of tweets, Yemen’s information minister slammed the Iran-backed militia for coercively removing children from their schools and neighborhoods in Sanaa and other Houthi-run areas to recruit and deploy them to battlefields.