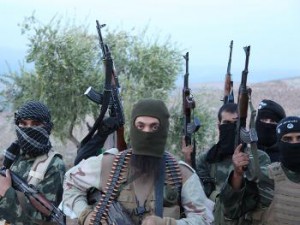 The witnesses, speaking on condition of anonymity for fear of retribution, said al-Qaida made the captured Houthi fighters, who were in their early 20s, kneel and kiss their hands before shooting them Wednesday afternoon in Dar Saad.

A witness said one of the rebels begged to be spared, saying he was the sole supporter of his family. But the witness said an al-Qaida fighter responded “Shut up, you dog,” before he and the others shouted Allahu Akbar (God is greatest) and opened fire.

Meanwhile in the southern Abyan province, five al-Qaida militants were killed in a suspected U.S. drone attack that targeted their vehicle in the district of al-Mahfad, security officials and tribesmen said.

The fighting in Yemen has continued despite a five-day unilateral truce by the Saudi-led coalition that has been waging an air campaign against the Iran-supported rebels since March. The truce was intended to pause months of fighting and allow for the dispersing of much-needed humanitarian aid.

Al-Qaida fighters raided the office of humanitarian group CARE International in Aden earlier this week, witnesses and security officials said, speaking on condition of anonymity for fear of retribution.

CARE said in an email that its office in Aden was looted this week by unknown actors who stole two cars.

Local militia officials have accused al-Qaida fighters of trying to ride the wave of recent military advances by anti-rebel forces, which drove the Houthis from Aden in July and have been advancing around its outskirts. The Houthis and their allies still control the capital, Sanaa, and much of the country’s north.