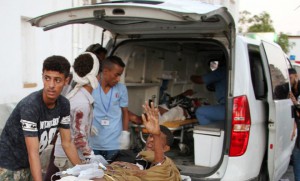 Al-Qaeda in Yemen has labeled the rival Daesh group “deviant” and distanced itself from a Daesh-claimed suicide attack in Aden last week that killed dozens of soldiers.
“We explicitly declare that we were not involved in any way in this operation,” Ansar Al-Sharia, Al-Qaeda’s branch in Yemen, said in a statement received Thursday by AFP.
The Dec. 10 attack in Aden targeted a crowd of soldiers gathered to collect their monthly pay at a barracks in Al-Sawlaban near the southern city’s international airport.
The attack left 48 soldiers dead and 29 wounded, a health department chief said.
“At the request of the Ba Kazem tribe, which lost many of its sons in the attack, we are issuing this statement to prevent anyone trying to… sow discord between the tribes and their sons, the warriors of Ansar Al-Sharia,” the group said.
“We see Daesh as a deviant group… that has shown its enmity toward Ansar Al-Sharia and other Islamic groups,” it said.
The statement stressed that Al-Qaeda has repeatedly said it is determined to fight “Americans and their allies” while avoiding “the shedding of any Muslim blood.”
Al-Qaeda and Daesh have exploited a conflict between the Yemeni government — backed by a Saudi-led coalition — and Iran-backed Houthi rebels who control the capital Sanaa, to bolster their presence across much of the south.
The rival militants have carried out a spate of attacks in Aden, Yemen’s second city and headquarters of the internationally recognized government whose forces retook the southern port from the Houthis last year.