You are here: Home / MidEastGulf / Yemen: Al-Qaeda blows up clinic after executing dentist 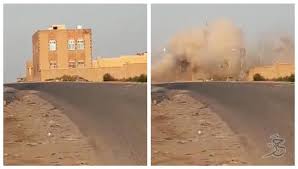 Al-Qaeda blew up a medical center in war-torn Yemen on Tuesday, 10 days after executing a dentist it accused of guiding US drone strikes against its militants, like reported by thedefensepost.com.

The clinic in the Somaa district of Al-Baida province was where the dentist worked before his execution, a local official told AFP.

The jihadists shot Motthar al-Youssoufi, then crucified his body and left it outside the health center on August 15.

On Tuesday, they blew up the clinic.

Al-Qaeda in the Arabian Peninsula (AQAP), which is active in Yemen, is considered by the United States as the radical group’s most dangerous branch.

Washington has carried out a drone campaign against its leaders for the past two decades.

But the Sunni extremist group has thrived in the chaos of civil war between Yemen’s Saudi-backed government and Shiite rebels who control the capital Sanaa.