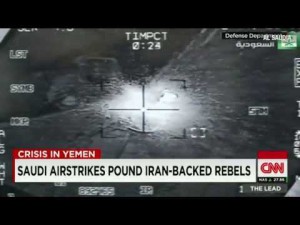 The death of two journalists in an Al Houthi-run prison in Dhamar, northern Yemen after a Saudi warplane launched an attack has sparked outrage — with some activists accusing the militia of intentionally incarcerating opponents in military sites that are frequently targeted by air strikes.

On May 21, Saudi warplanes targeted government buildings overrun by the Al Houthis in Dhamar, killing two journalists and injuring one who were imprisoned inside the building. The strikes sparked accusations that the militia used the journalists as a human shield. The third journalist who narrowly survived the air strikes told Gulf News by telephone on Wednesday that he and his friends, who work for local media outlets, were arrested on May 20 after covering an anti-Al Houthi gathering in a nearby countryside region.

“The Al Houthis stopped us and arrested us without giving any explanation,” said the young journalist who preferred to remain anonymous, fearing Al Houthi reprisal.

The Al Houthis blindfolded the journalists and locked them in the ground floor of one of the buildings.

“We shouted at the guards and asked them why had they put us in that place that might be hit by the Saudi jets.”

He did not complain about any verbal or physical mistreatment by the Al Houthis. When asked, the Al Houthis told the journalists’ relatives that they knew nothing about their whereabouts.

‘Screams of other inmates’

Exactly 24 hours after their arrest, warplanes began bombing the buildings and the first missile hit a building next to the detention area. “When we heard the first explosion in the afternoon, we rushed to the door to plead to the guards or anyone outside the building to set us free. But no one was there and we only heard the screams of other inmates from other rooms.”

The journalist escaped death when he left his two friends who were yelling for help at the door to pick something up from the other corner of the detention area.

“I do not remember what happened afterwards. When I was under the rubble, I shouted when I heard sounds and tried hard to let them see my hand.”

Journalists Abdullah Gabel and Yousuf Al Ayzari were buried under the rubble and their bodies were retrieved six days after the strikes.

Fearing arrest by the Al Houthis, the journalist said that he fled the hospital where he was being treated to an undisclosed area in the province.

Al Houthi officials did not answer Gulf News’ calls to respond to the accusations, but some of their sympathisers said that the Saudis should be held responsible for bombing Al Houthi prisons.

“People have the right to criticise the Al Houthis for detaining them, but they should criticise the Saudis too for bombing the prison,” Ali Al Bukhaiti, a former spokesperson for the Al Houthi movement, said on his Facebook page on Wednesday.

The Al Houthis have detained dozens of opponents, including journalists who opposed their governing of the country and backed Saudi-led bombing operations that targeted Al Houthis military sites across the country, according to human right organisations.